This is a throwback to the first season of Grey’s Anatomy, way back in 2005.

My Boats Afloat poster appeared on the set, including in two scenes from the 2005 season opener

In case you don’t watch TV, Grey’s Anatomy is a popular medical drama about overworked surgical interns and their sex lives set in a Seattle hospital. It’s entertaining, with lots of good looking characters. Sunday nights at 10pm (after Desperate Housewives).

… My poster shows up on the third episode of Grey’s Anatomy, October 16, 2005. Izzy and Alex discuss going out right next to the Boats Afloat poster! Now I’m a big fan of the show and of course will watch the rest of the season to see if the poster appears again. The plot thickens… Will Dr. McDreamy choose Meredith or Addison? Will Alex pass his make-up exam? Tune in next week.

It’s impressive, in its 15th season, Grey’s Anatomy is still going strong. I was seriously hooked on the show for several seasons, and occasionally we’d spot the poster on the wall, but for some reason stopped watching it. So I don’t know what eventually happened to Dr. McDreamy or Meredith, or when they swapped out wall art.

The poster was one of several created in collaboration with Dirk Mynatt of GForce for the Northwest Yacht Broker’s Association.

Note: the use of the poster was a total surprise, and I’ve been asked if I was compensated for the use. Nope, I was not, and I did not pursue it.

See more of my illustrated posters. 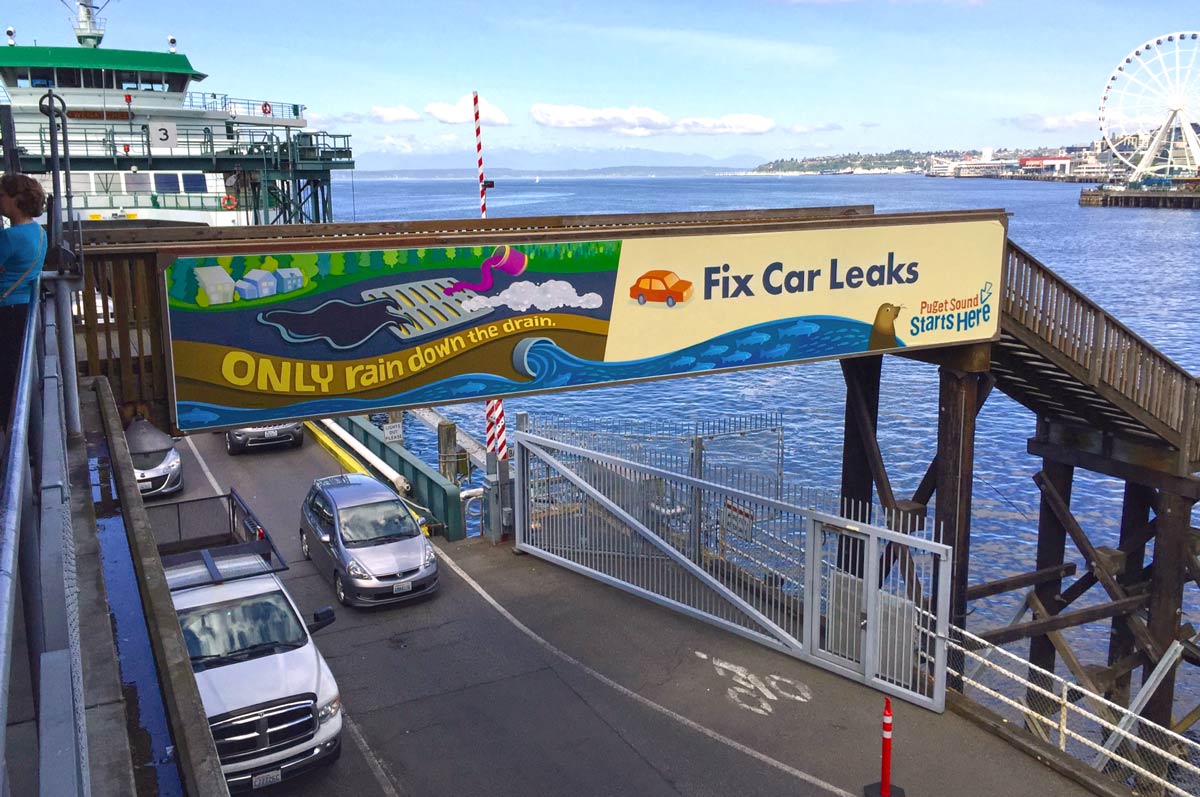 It’s kinda thrilling to see your work really, really big. And for a critical cause — the health of Puget Sound. This banner at Seattle’s Colman ferry dock is 5 ft. by 33 ft!

I recently revamped an illustrative public awareness campaign I originally created for Kitsap County to promote their water pollution hotline. Funded by the Washington State Dept. of Ecology, the original illustration already has had a useful life — adapted for water pollution awareness advertising by government organizations throughout the region, including City of Bellingham, Port Angeles and Bremerton.

Now, for a Puget Sound Starts Here campaign, the illustration is on buses and ferries from Bellingham to Olympia and west to Clallam County, plus on social media and Pandora ads. The illustration was customized for each required proportion for maximum readability and impact. The PSSH messages are simple and direct: Fix Car Leaks; Use Compost Not Chemicals; Pick Up Pet Waste; No Oil Paint Suds. So do your part! With millions of us living on the edge of a sensitive Puget Sound, we all have an impact on water quality and salmon habitat. Let’s keep only rain going down the drain.

Glyph series all framed up for @art_in_the_woods_k

Note: As of 2021, we are no longer taking new website projects.